Why stupid questions are often the most important ones We’ve all hesitated to ask something, fearing that others will find our question stupid. Staying quiet may seem like the safe option – but in all likelihood you’ll eventually regret it. Luckily for everyone, we’ve come up with a foolproof solution to help teams overcome the mental barriers that cause this counterproductive behavior.

tl;dr: Ask – and encourage others to ask – stupid questions because they have the magical ability to save you from a lot of trouble later on. If you’re not sure how, go ahead and get yourself a copy of our Project Navigation Game at https://projectnavigationgame.futurice.com/

The backend is already finished, right?

A while ago we started a project together with our client, full of energy and optimism. This positive atmosphere lasted right up to the point when we realized that there was a huge gap between what we proposed to build and what was actually needed to get any value out of it.

More specifically, the required backend functionality was not there. We assumed that it was, and the client assumed it was part of the work we would do. If only one of us had asked a very simple question, “The backend is already finished, right?” it would have saved us tens of thousands of euros, as well as our relationship with a valued client. Not our proudest moment, that one.

So, what prevented anyone in the team from asking the simple question, “The backend is already finished, right?”

In order to maximize the likelihood that somebody in the team asks that so-called “stupid” question that ends up saving time and money, we need to understand – and play around with – both human psychology as well as group dynamics.

First, psychologically, the key reason why people don't want to ask stupid questions relates to our basic need for belonging and being accepted by others, as explained in the theory of social acceptance.

The safest thing to do in order to belong is not to stand out, and act in accordance with the norms of the group. Asking a challenging question in a team that has not yet gone through norming is very risky. If you reveal you don’t know something, will that be admired or frowned upon? When the team has not yet established these kinds of norms, asking a question is like sticking your neck out while bright spotlights point at you and enthusiastic, axe-wielding executioners patrol the area. It’s much safer to keep quiet.

There are other patterns stacked against asking stupid questions as well. Take confirmation bias, for example: At the beginning of a project, and especially in a consulting setting, we are looking for confirmation that we are ready for this, and the trust others have placed in us is justified. And according to the Ostrich effect, if we pretend a specific risk or problem is not there, it isn’t, and maybe it will go away. Combined, these psychological phenomena are very much linked to the concept of psychological safety.

A safe space for questions

To make it more likely that those important, challenging questions are asked, we developed the Project Navigation Game. It is, as the name suggests, a game, complete with more than 250 questions that help teams explore anything that may have been overlooked when setting up the project.

Above we discussed two main obstacles: social acceptance (wanting to belong to the group) and diffusion of responsibility (the group’s dynamic of inactivity). So how exactly does the Project Navigation Game help us steer around these obstacles?

First and foremost, it is a game – and one thing a game does is that it uses its rules to define the norms of the group of players. Following the rules is the norm, so if the game rules say “choose a card with a challenging question and ask it,” asking that question is considered acceptable behavior. Furthermore, as the question is defined by the card, the player is able to outsource any judgment on the question itself to the creators of the game (and we’re fine with that). The rules of the game change what the players consider to be the safest course of action in order to belong: follow the rules – that is, ask questions. 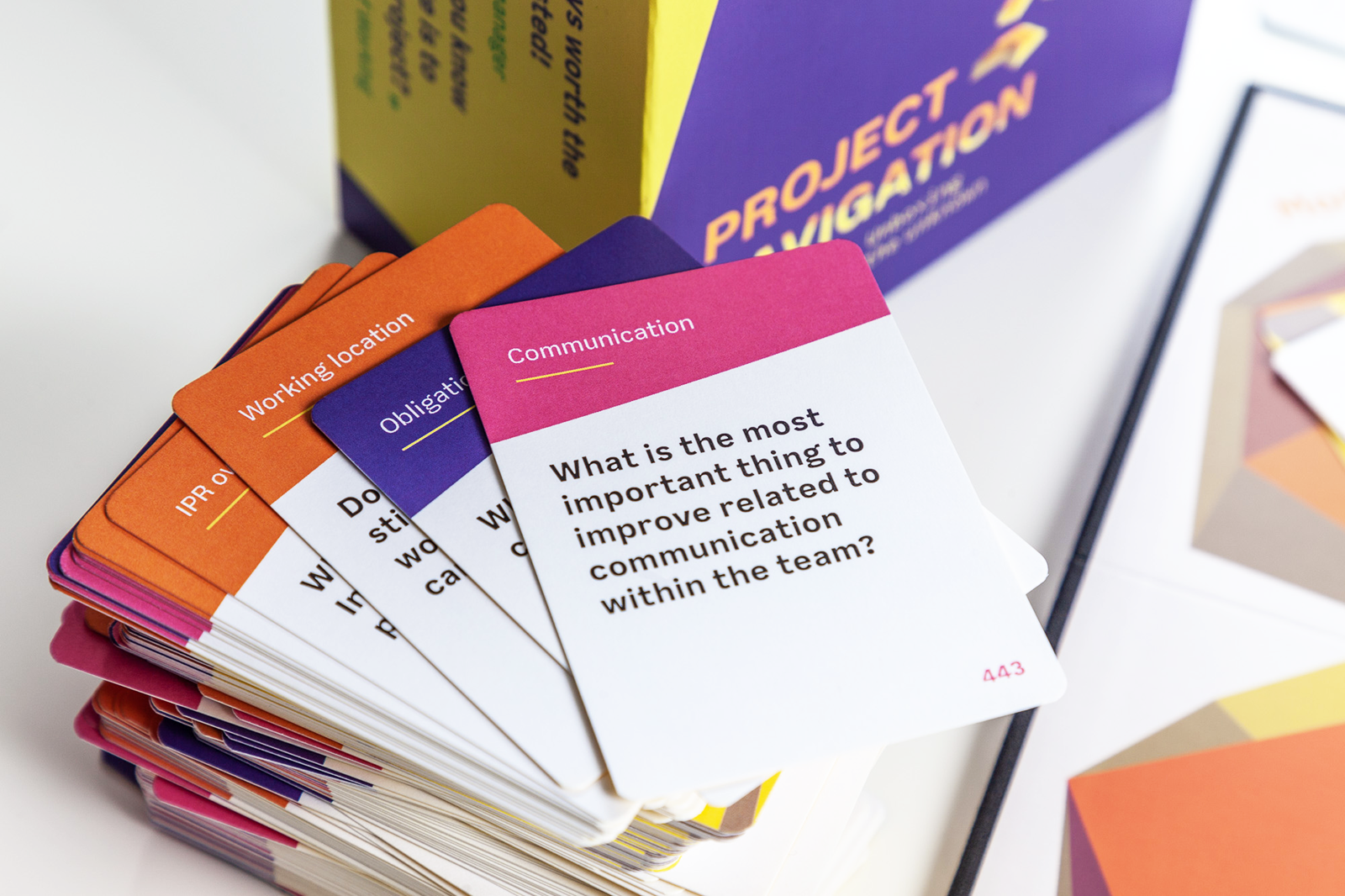 The second aspect – that of diffusion of responsibility – is similarly circumvented by defining the responsibilities of each player as being the same. Each player has the same role in the game, namely, to ask challenging questions. The reason why you should ask that question instead of the person next to you is simply because you have that card in your hand and they don’t – so within the game, you are the only one who could ask the question.

Besides lowering these barriers, the Project Navigation Game also helps the team by providing a set of questions which in turn are derived from Futurice’s experience of executing over 3000 projects. Among other things, It also helps the members of a newly formed team to get to know each other.

Having said this, the Project Navigation Game is not a silver bullet. In teams with strong hierarchies, strong ego types or a very judgmental culture, the game is likely to be too temporary to overcome those barriers. In these situations, a facilitator can help boost the positive effects of the game’s rules on the team.

Fun and games, and then some

In summary, our experiences clearly demonstrate that the Project Navigation Game significantly lowers the barrier of asking stupid questions. And just as a reminder, that single “stupid” question could very well mean the difference between a satisfied customer and a waste of time, money, motivation, and good ideas.

So how can you use this information, besides printing the game (did we mention it’s open source?) or ordering a copy of the game for yourself? There are three key lessons to take away.

The first one is that games are a valuable business tool, and should not be overlooked as just a silly way to do things.

The second one is that psychology matters. We are not logical beings, so often we need to help in order to do the thing we intellectually know is good for us.

And the third and final point to raise is that judging things like questions is not beneficial in any way. So, whenever you find yourself thinking, “That's a stupid question,” complete that thought with, “and I’m glad they asked it!”